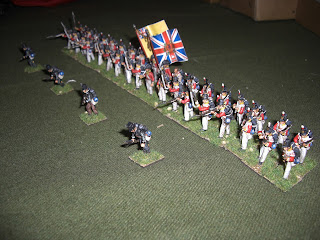 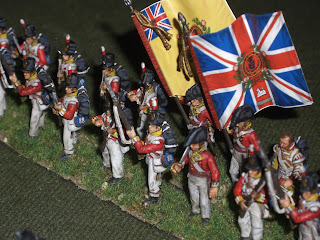 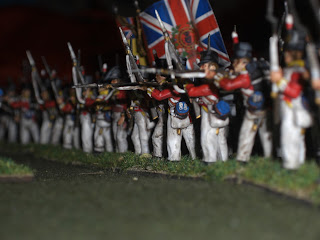 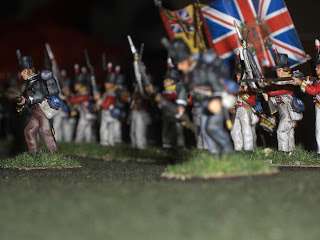 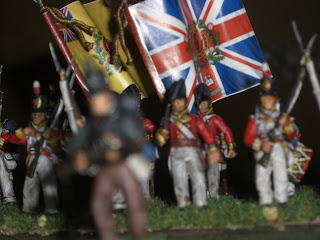 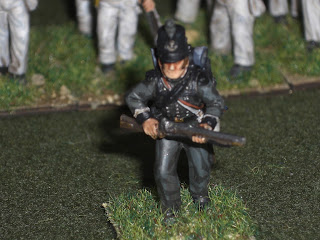 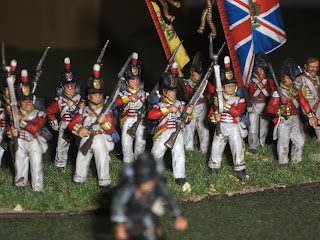 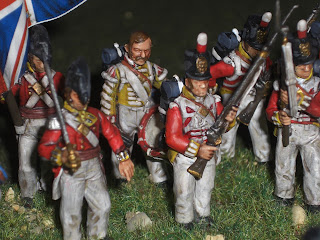 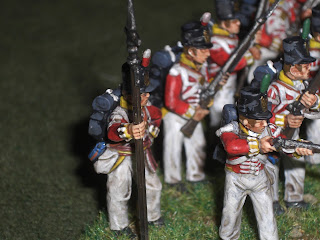 One of our orders dispatched recently was this Peninsular Regiment bearing the colours of the 88th Connaught Rangers.


The 88th was established in Connaught in 1793 and it bore on its colours and appointments a harp and a crown with the motto Quis Separabit – "Who shall divide us".
It first saw service in 1794 in Flanders in the disastrous Walcheren campaign against Napoleon's troops and, despite their inexperience, the troops fought well, but hundreds perished in the British Army’s winter retreat that year. The regiment later fought in the West Indies, Egypt, India and South America before it joined Wellington’s army in the Peninsular in 1808. It was during the Peninsular campaign that the 88th distinguished itself as one of the finest regiments in what Wellington himself was later to describe as "that most astonishing infantry".
Posterity has ensured that we have a first hand account of some of the most extraordinary actions that took place in the Peninsular of that time by the published diaries of Lieutenant William Grattan who served with the 88th in Spain from 1809 until 1813. The Connaught Rangers were "the most Irish of all Irish regiments"(Oman) and in Grattan's own words were "a parcel of lads that took the world aisy"and "without shoes they fancied themselves at home, without food they were nearly at home."
The 88th served under General Picton in the 3rd Division or the "Fighting Division"as Grattan was proud to call them. Picton himself seemed to have had a love-hate relationship with the 88th. When he first addressed them he called them "The Connaught Footpads" in reference to their reputation for plundering, but he soon recognised their abilities when it came to a hard fight.
It is evident that in moments of crisis he came to use the 88th as shock troops – heavy stormtroopers to be used at the critical point of a battle to break the spirit of their opponents by hand-to-hand fighting, and it was Picton who came to give them the infamous nick name of "The Devil’s Own".
The many battles of the Peninsular War have filled many books but the major actions in which the Connaught Rangers made an inimitable contribution can be summarised below:


The 88th fought at Talavera in July 1808 but it was at the Battle of Bussaco in September 1810 that the 88th first distinguished themselves and in the words of Arthur Bryant, the eminent Napoleonic military historian, "saved the situation".
Wellington was in retreat towards Portugal and his small Anglo-Portuguese army was heavily outnumbered by the advancing French army under Massena. Wellington was under political pressure to gain a victory to quell unrest in England about the cost of the war in Spain. He therefore chose to fight a delaying action against the French advance. The position was a very strong one and all should have worked well, but due to heavy mist on the morning of the battle a French column inadvertently found themselves at a weak point in the British lines at the summit of the Crest. There was a real danger that the French could cut the allies in half and roll-up one flank.
Then acting with great promptitude, the fiery Scottish colonel of the 88th, Alexander Wallace, placed himself at their head and, supported by four companies of the 45th (1st Nottinghamshire), they charged the French and hurled them back down the mountain. Wellington himself witnessed the action and, reigning his horse, shouted to Wallace: "Upon my honour, I never witnessed a more gallant charge than that just now made by your regiment."
Battle of Fuentes de Onoro, 3rd May 1811
The French offensive into Portugal was broken in the winter of 1810 and Wellington was pursuing them towards the Spanish border.
In this battle Wellington attempted to prevent the French from relieving the city of Almeida which the allies had besieged. The centre of Wellington’s lines rested on the village of Fuentes de Onoro. The second day of fighting, the village changed hands several times and finally the French drove out the last of the Scottish Highlanders (71st and 79th) and 24th Foot – (Elizabeth Longford). "All now depended on the Connaught Rangers."
The 88th at that time formed part of the reserve brigade of the 3rd Division and Colonel Wallace sent word to Wellington: "I shall take it with my regiment, and keep it too." On this, the whole brigade; 45th Nottinghamshires and the 74thHighlanders, led by the Connaught Rangers swept into the attack - ( Arthur Bryant)."As they drew level with the torn and blackened Highlanders, the latter gave them a cheer, but the Rangers passed on in grim silence. Then the whole martial concourse, Irish, Scottish and English went forward after the 88th in a surge that swept the French away with it."
The once picturesque Spanish village was in utter ruin with some 4,000 dead and wounded, but victory was won. Wellington later asked the British Government, in the detached understated manner which he often used to conceal his true feelings, for a contribution towards the restoration of the village. It had recently become a battlefield and had not been ‘much improved by the circumstances’.


It was in order to confer a mark of distinction upon the Connaught Rangers that a junior officer or subaltern volunteer from the 88th was requested to lead the "Forlorn Hope", the first storming party through the main breach of the fortress walls. Almost certain death, but if he survived, the leading officer was normally assured a captaincy.
A Lieutenant William Mackie volunteered and was granted the command, composed of 20 volunteers from the 88th. Before hurling the whole of the 3rdDivision into the assault, General Picton gave this particular address to the 88th:


"Rangers of Connaught! It is not my intention to expend any powder this evening. We’ll do this business with the cold iron."


The storming party of the Light Division also moved off to the attack unloaded. Asked why by one of the staff, their commanding officer replied: "Because if we do not do the business with the bayonet, we shall not be able to do it at all." At which Wellington murmured: "Let him alone; let him go his own way" (Napier).
The men lined up in grim silence for the sheer hell of a night attack on the imposing fortress. At the signal, the 3rd Division rushed the 300 yards through an iron hail of grapeshot towards the 11 foot deep ditch and despite terrible losses began to swarm up the breached walls.
A magazine at the top of the ramparts exploded killing 300 French and British together, including the Major General McKinnan commanding the assault. A single 24 pounder cannon remained on the breach served by a five-man French crew, which raked the remaining British with a terrible fire. At that moment only one officer remained alive on the breach. Major Thompson of the 74th Highlanders called upon the few men near him to storm it.
Three men of the 88th, Sgt Pat Brazil, Kelly and Swan took up his challenge. As between them and the gun yawned a deep entrenchment, Brazil told Kelly and Swan to throw down their muskets and armed only with bayonets, leaped across the trench and threw themselves on the French gun crew slaughtering everyone of them, Swan losing an arm by a sabre stroke in the murderous hand to hand conflict. There was a thrilling cheer and the breach was carried.

The 88th went on to give further great services throughout the Peninsular and the invasion of France through the Pyrenees. "Years of hard fighting, fatigues and privations that we now wonder at," wrote Grattan, "had a charm that in one way or another bound us all together; and, all things considered, I am of the opinion that our days in the Peninsular were amongst the happiest of our lives."
At the conclusion of the war in 1814 the 88th was sent to Canada and although recalled to Europe when Napoleon escaped from Elba it arrived too late to take part at Waterloo. History will never know what they would have done to the Imperial Guard!

Fantastic entry! I know I'm commenting on a post almost two years old to the day, but this was one of the first results that turned up when I searched Connaught Rangers, or perhaps 88th foot. I just got a box of the same 28mm Perry Brothers British Line infantry pictured here, and I've got to say that your images have proved an invaluable guide to my own painting. The inclusion of a bit of the regimental history in the post is also very well done and helpful, my own researching of the history of the Napoleonic Wars having only just begun quite recently.