The 5th New York Volunteer Infantry, "Duryée's Zouaves," was one of the most renowned fighting regiments of the American Civil War. Their colorful Zouave uniform, precise maneuvers, effectiveness in combat and steady bearing under fire, won them universal respect and recognition. Many observers considered the 5th New York to be the best-drilled volunteer unit in the Federal Army. In addition to a casualty list that totalled 211 dead out of 1,508 men borne on the rolls, nine of its soldiers attained the rank of general - five the full rank, and four by brevet.


The French Zouave military system was popularized in American just prior to the Civil War by Elmer E.
Ellsworth, a young man from New York who aspired to a distinguished military career. Ellsworth was
fascinated with what he learned about the Zouaves from newspaper accounts, books from France, and a
French surgeon who had served in a Zouave regiment in the Crimea. In 1859, he organized the U.S.
Zouave Cadets in Chicago, uniformed them in modified Zouave dress, and trained them to be disciplined
men of arms and masters of the Zouave drill. This intricately timed drill included skillful bayonet maneuvers;
loading and firing while standing, kneeling and lying down; and "rallying by fours," a Zouave fighting tactic
whereby squads of four met formed fighting units, ready to face attack from all sides. The Cadets' loose
fitting garments were ideal for executing these rigorous maneuvers. In contrast to standard military
exercises and dress of the time, Ellsworth's elaborate drills and dazzling uniforms made for spectacular
demonstrations. In 1860, after a sensational tour of twenty Eastern cities, the Cadets won acclaim as the
champion drill team in the country. Co. Ellsworth's famed unit gained the attention of many, including
Abraham Lincoln.


When the Civil War broke out the next year, Ellsworth recruited a new Zouave regiment from the rugged,
physically fit men of the New York City Fire Department. Determined to defend the Union, Col. Ellsworth
and his red-shirted firemen of the 11th New York Fire Zouaves were part of the Federal invasion of


Northern Virginia and the occupation of Alexandria on May 24, 1861. That day Ellsworth was fatally shot
after removing a Confederate flag from the roof of the Marshall House Hotel. This highly-publicized incident
made Ellsworth a hero and martyr for the Union, stimulated army enlistments in the North, and generated
many Zouave regiments.


Ellsworth's home state of New York had a large French immigrant population and produced the greatest
number of Zouave units. Of the 30 New York regiments recruited during the War, four were established in
April and May of 1861 during the first large wave of Zouave regiments. The spirit of camaraderie was
strong in many units, which were frequently named after their regimental commander or "father." The
renowned 9th New York Volunteer Infantry, known as Hawkins' Zouaves, was mustered in on April 23,


1961, the first Zouave regiment to be raised in the Union Army. Other well known groups followed: the 11th New York, the 10th New York (National Zouaves), and the 5th New York (Duryee's Zouaves).
The 5th New York, so-called "Red Devils," were one of the most famous units because of their flamboyant


uniforms, precise drilling and firing ability, and steadfast courage on the battlefield. The 5th New York
served at Second Bull Run and suffered one of the heaviest battle fatality rates of any Federal infantry
regiment.


While some Union Zouave regiments were recruited from pre-existing volunteer militias, other were newly
formed in the early part of the War such as the 11th Indiana Volunteer Infantry, known as Wallace's
Zouaves for its leader, Lew Wallace, author of Ben Hur. Eastern states such as New York, Pennsylvania


Midwest. By the end of the War, over 80 Zouave regiments had been raised in the North and around 20 in
the South. Noted Confederate regiments included the notorious Wheat's Louisiana Tigers whose Major,


Chatham Roberdeau Wheat, was born in Alexandria, Virginia and the Louisiana Zouave Battalion, or Coppens' Zouaves, whose leader fell at Antietam. Because of its distinct French heritage, Louisiana
produced the most Southern Zouave regiments. A number of women, especially the wives of soldiers, were


associated with Zouave regiments and wore quasi-military uniforms. Called vivandieres and cantinieres in


the French Army, these female members served as mascots and suppliers of beverages, tobacco and other


for her bravery at Fredericksburg where she was wounded. Kay Brownell, who came from a British military
family, was a vivandiere and nurse who heroically carried the flag at First Bull Run for her husband's
regiment, the 5th Rhode Island Infantry.


The Zouaves took great pride in their gallant image, their reputations as reckless, brave fighters willing to
die in combat, and most of all in their exotic uniforms. The colorful, unrestrictive attire of the soldiers
differed greatly from the tight and stiff European military dress of 1830 when the first Zouave regiments
were formed. Predominantly blue and red in color, the Zouave uniforms varied widely from regiment to
regiment. A number of units like the 5th New York, 9th New York, Collis's Zoaves and the Louisiana
Tiger Zouaves adopted highly Arab-influenced outfits which incorporated full pants, leggings, short


moderate, the Zouaves could always be identified by the unusual accent of their dress and French goatee
beards and mustaches often worn by soldiers to complete the "Zouave look." Some nonconformists
sported shaved heads and numbers, slogans and designs cut into their hair. Innovator Elmer Ellsworth
created several stunning uniforms for his Chicago Zouave Cadets: a non-Zouave but French-style blue
traditional "full dress" uniform; a Chasseur uniform using blue, standard frock coat but with red trousers;


and an informal fatigue uniform. The dress and style of the Zouaves were so popular that uniforms were


made for young children, including President Lincoln's son Tad and Gen. Ulysses S. Grant's son Jesse.
Zouave paper dolls, coloring books and other toys were also popular. Ladies' fashions of the time showed
Zouave influences in the use of ornate jackets, vests and other oriental flourishes. Contrary to popular
belief, the Zouaves' vivid uniforms were not replaced in 1863 in favor of standard regulation attire. The
114th Pennsylvania, Collis's Zoaves, for example, appear in 1864 photographs wearing their recognizable


uniforms. Hawkins' Zouaves, the 5th New York, and Wallace's Zouaves also proudly wore their
uniforms throughout the War.
As part of a commission one of our customers requested a small band of 5th New York Zouaves. The results are below 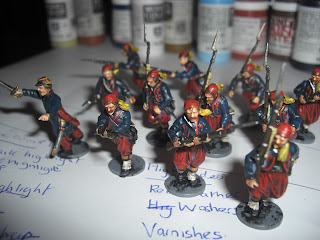 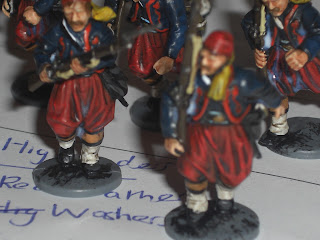 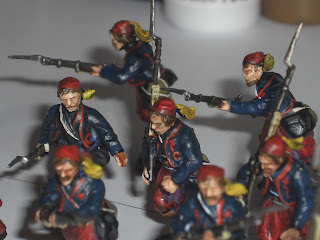 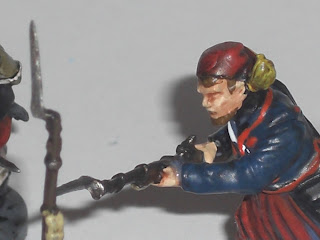