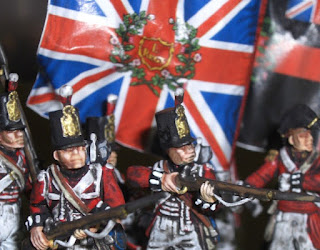 Vimiera
The first battalion served at Copenhagen in 1807, then Cadiz and other places in 1808-9. They then sailed to Portugal to join Sir Arthur Wellesley's Army. The first battle they fought in established the 50th as the Fighting Half-Hundred. They were commanded by Colonel George Townshend Walker who was more intelligent than most officers of his generation. When the French column of 2,000 advanced towards his line of 700 he moved them to a position than meant that the column approached at an oblique angle. This enabled his men to fire on the front and flank of the French formation. Only those Frenchmen on the outside of the column could return the fire, and when the 50th charged them they were unable to deploy into line and confusion ensued.
The French were routed on this occasion, and the tactic was imitated by other commanders including Wellington. The French General Loison, who witnessed the 50th's action, asked, some time later, to meet with Colonel Walker and congratulate him on his steadiness and talent. It was in this battle that the 50th captured a staff used to carry the French eagle. This was retained as a trophy and carried by a sergeant on campaign with the regimental and King's Colours. During the battle, Lieutenants Rudkin and Ryan were wounded and captured. Ryan later became a lieutenant-colonel and commanded the 50th in the First Sikh War. He died of wounds received at Sobraon. 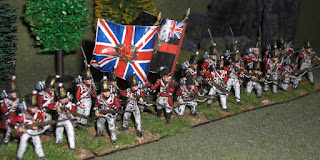 Corunna
The regiment were with Fane's brigade at Rolica and Bentinck's brigade at Corunna. They suffered badly on the retreat and made a brave charge at the battle on 16th January 1808, commanded by Major Charles Napier who later commanded the army which conquered Scinde. He had served as an officer in the 50th since 1805 and was sent out to command the regiment. They charged through Elvina, suffering heavy casualties including Napier himself. A musket ball broke his leg, he was bayoneted in the side and back, was sabred on the head, had his ribs broken by gunshot and suffered severe contusions from being hammered with the butt of a French musket. He was also taken prisoner but was not treated by a doctor until two days later.
After the withdrawal from Corunna, the 1st and 2nd battalions were refitted at home in Kent and sent on the costly and unsuccessful Walcheren expedition. They were in the Peninsula again by May 1811 when they fought at Feuntes de Onoro in the 1st Division. The 1st battalion were in the brigade transferred to the 2nd Division to make up for the losses at Albuera, and remained in that division until 1814. They were again commanded by Charles Napier who had been released on exchange with a French officer. At the battle of Coa on 24th July 1810, Napier had two horses short from under him , and at the battle of Busaco he was badly wounded in the face. The regiment also took part in the battles at Almarez, Vittoria, the Pyrenees, the Nive and Orthes as well as many other skirmishes.
Posted by jono at 16:49