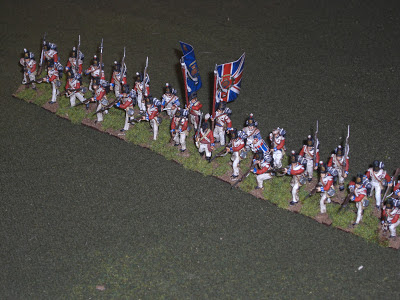 The regiment was first raised in 1633 as the Royal Regiment of Foot by Sir John Hepburn, under a royal warrant from Charles I, on the Scottish establishment for service in France. It was formed from a nucleus of Hepburn's previous regiment, formerly in Swedish service, which had been in existence since 1625. When in France it absorbed the remnants of a number of other Scottish mercenary units which had fought in Swedish service, and by 1635 had swelled to some 8,000 men. Sir John Hepburn, was killed at the siege of Saverne in 1636; it was then taken over by his nephew, Sir John Hepburn who was killed in action the following year. Lord James Douglas was appointed the new colonel, and the name of the corps was altered to the Régiment de Douglas, numbering some 1200 Scotsmen. The regiment fought with distinction, under Douglas, until he was killed in a skirmish near Douai in 1645, in attempt to take the city from the Habsburgs. His elder brother Archibald Douglas, Earl of Angus was appointed in his place. In all the regiment served in France from 1633 to 1661, when it was recalled to England.

Because the regiment had been formed by Royal Warrant, it was legally part of the Crown's armed forces, even though it had been out of the country for three decades. As such, it was recalled to help secure the coronation of Charles II, and helped provide a model for the other regiments founded after the collapse of the New Model Army. The regiment returned to France from 1662–66 and 1667–78, seeing English service again during the Second Anglo-Dutch War; soldiers of the regiment responded to the Raid on the Medway, when Pepys recorded that Here in the streets, I did hear the Scotch march beat by the drums before the soldiers, which is very odd.

1678 marked the final end of French service, with the regiment placed permanently on the English establishment. It was posted to Ireland in 1679, and in 1680 the regiment was sent to Tangier, where it won its first battle honour In 1684, the regiment was titled His Majesty's Royal Regiment of Foot, and withdrawn to England .In 1685 they fought for James II in the Monmouth Rebellion, at the Battle of Sedgemoor, and the following year a second battalion was raised. In 1688, they were the only regiment of the army to remain loyal to James in the Glorious Revolution; both battalions of the regiment mutinied and were disarmed.

In 1751, the regiment was titled the 1st (Royal) Regiment of Foot,ranked as the most senior of the line regiments of infantry. The 2nd Battalion was sent to Nova Scotia in 1757,and saw service in the Seven Years' War, capturing Louisburg in 1758, Guadeloupe in 1762 and Havana in 1763, returning home in 1764.Both then served as garrisons in the Mediterranean, the 1st in Gibraltar from 1768–75, and the 2nd in Minorca from 1771-75.

The 1st Battalion was sent to the West Indies in 1781, fought in the capture of Sint Eustatius that year, and was itself captured at St. Kitts in January 1782 but exchanged later in the year.
French Revolutionary Wars and Napoleonic Wars

The 1st Battalion had returned to the West Indies as a garrison in 1790, and served there until 1797,with a brief period of combat in the Haïtian Revolution. The West Indies were hotbeds of disease, and the battalion lost more than half its strength to disease in this period. It was reformed from militia volunteers in Ireland in 1798: This year saw a major rebellion erupt in Ireland after years of simmering tension. The Lothian Fencibles fought with distinction at the Battle of Vinegar Hill, one of the more important engagements of the rebellion. Subsequently, the regiment gained a new regimental song:
Ye croppies of Wexford, I'd have ye be wise and go not to meddle with Mid-Lothian BoysFor the Mid-Lothian Boys they vow and declareThey'll crop off your head as well as your hairderry, down, down.Remember at Ross and at Vinegar HillHow your heads flew about like chaff in a millFor the Mid-Lothian Boys when a croppy they see they blow out his daylights and tip him cut three derry, down, down.

After the rebellion was over in Ireland they were used in minor raids on the coast of Spain in 1800.Meanwhile, from 1793 to 1801, the 2nd Battalion was based in the Mediterranean. It fought at the Siege of Toulon (1793) and the capture of Corsica(1794), returning briefly to Northern Europe for the Battle of Egmont op Zee in the 1799 Helder Campaign, before fighting in the 1801 Egyptian campaign at the Battle of Aboukir and the Battle of Alexandria.

Both battalions were subsequently dispatched to the West Indies, the 1st from 1801 to 1812, and the 2nd from 1803 to 1806. The 1st fought at the capture of Saint Lucia, as well as of Demerara and Essequibo in 1803, and the capture of Guadeloupe in 1810. The 2nd then moved to India, where it would remain until 1826, , whilst the 1st was sent to Quebec with the outbreak of the War of 1812.It fought in the battles of Sackett's Harbor and Buffalo & Black Rock, as well as the capture of Fort Niagara (1813), the battles of Longwoods, Chippawa, and Lundy's Lane, along with the Siege of Fort Erie and the battle of Cook's Mills (1814). In February 1812, the regiment was retitled as the 1st Regiment of Foot (Royal Scots), the first official appearance of the popular name. 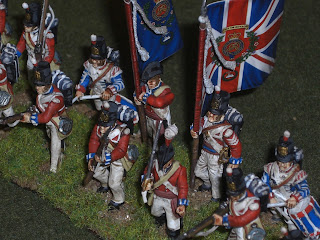 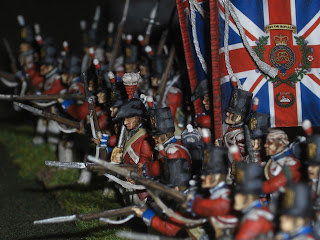 The 3rd Battalion is available in both its Peninsular and Hundred Days (Waterloo) Campaign uniforms on the website www.abrushtoofar.com
Posted by jono at 04:20