We regularly paint Prussian Napoleonic figures here at A Brush Too Far but it is rare that we get asked for Freikorps. Since this unit are from Calpe miniatures and its the first time we have painted them I thought I would do a little piece on the Corps. I have also put a number of photographs of the completed figures at the bottom of the article.

Lützow Free Corps (German: Lützowsches Freikorps) was a volunteer force of the Prussian army during the Napoleonic Wars. It was named after its commander, Ludwig Adolf Wilhelm von Lützow. The Corpsmen were also widely known as the “Lützower Jäger“ or “Schwarze Jäger“ (“Black Hunters”).

The unit was officially founded in February 1813 as Königlich Preußisches Freikorps von Lützow(Royal Prussian Free Corps von Lützow). Lützow, who had been an officer under the ill-fatedFerdinand von Schill, obtained permission from the Prussian Chief-of-Staff Gerhard von Scharnhorstto organise a free corps consisting of infantry, cavalry, and Tyrolean Jäger (literally, “hunters” ― i.e., marksmen, snipers), for flank attacks and guerrilla warfare behind the French lines. Volunteers were to be drawn from all over Germany (including Austria) to fight against Napoleon I of France; it was hoped that this broadly national force would aid in rallying the smaller German governments into the ranks of the Allies.
The Corps has been alleged to have consisted mostly of students and academics; however, in reality these amounted to no more than 12% of the total force, which was actually composed mostly of craftsmen and labourers. Besides the well-known Saxon dramatist and poet Carl Theodor Körner, the Corps also included academics, writers, and other well known figures, such as Georg Friedrich Kersting, Friedrich Friesen, Joseph von Eichendorff, and Friedrich Ludwig Jahn. The educator Friedrich Fröbel, who later developed the concept of the Kindergarten, also belonged to the Lützowers. In addition, at least two women,Eleonore Prochaska and Anna Lühring, had managed to join in disguise.
The Tyroleans, whose leaders Jakob Riedl and Joseph Ennemoser had fought with Andreas Hofer for the liberation of Tyrol since 1809, came into the Lützow Corps after the armistice of Summer 1813. Free Corps Uniforms: Mounted Jägerand Hussars. Illustration fromUniformenkunde by Richard Knötel
Because the Kingdom of Prussia already had problems financing and equipping its regular forces, the volunteers had to equip and supply themselves by their own means. Many times civilian clothing or old uniforms ― even enemy uniforms taken as booty ― were simply dyed. Black was therefore used for their uniforms rather than the normal Prussian blue, because this was the only colour that could be used to dye the improvised clothing (if any other had been used, the clothing's original colour would have shown through, resulting in an unacceptable mix of colours for the Corps as a whole). The quality of the material often left much to be desired.
For similar reasons of economy, a civilian-style trench coat, the so-called litewka or Polish frock coat ― double-breasted, without a tail-slit ― was chosen for infantry and rifle detachments, and later extended to the artillery. The tunic was black, as were the trousers, with red trim chosen for the rank insignia along the collar, cuffs, epaulets, and front edge of the tunic; on officers’ uniforms, collars and cuffs were faced in velvet. On the tunic’s front, eight embossed brass buttons were arranged in two vertical rows.
Volunteers with particular skills were allowed to transfer to special units with their own uniforms. Hussars and lancers (uhlans) wore dolman jackets, often brought from their former units, dyed black (as were the hussars’ pelisses). Hussars and lancers wore only black and white, the red being omitted. Officers’ uniforms carried silver cords, rather than white, and were in addition trimmed with black fur. Lützow himself wore the black hussar uniform. Free Corps Uniforms: Musketeer andJäger. Illustration from Uniformenkunde byRichard Knötel
The Tyrolean Jäger retained their previous uniform, Gray with green facings.
Headgear
Due to its improvised nature, headgear worn by the Free Corps was very various. The infantry headgear corresponded to that of Schill’s corps of 1809, consisting of a black shako, with a clasp and side cordon and tassel. The cavalry wore a felt shako (though due to scarce resources, some were made even of cardboard) with a black-and-yellow braid and tassel; often a black oilcloth was worn over them as protection from the weather. For parades cavalry were accustomed to wear a black horsehair tassel and a black cordon. The Tyroleans continued to wear the turned up and plumed hats of their native region.
In addition, some volunteers sported peaked caps or even large berets. Often against orders the symbol of a civilian or student society would be attached. In the early days of the Corps, Lützow and others also wore a skull on their headgear (in the same manner as the Duke of Brunswick’s Schwarze Schar), until forbidden by royal command.

The Lützow Free Corps distinguished itself from the mass of the army, in that it was a voluntary association, whose members were remarkable for superior activity, energy, and enterprise. Unlike many of the regular army, their loyalty was rather to Germany as a whole than to Prussia or the House of Hohenzollern; many of them made a vow to neither cut their hair nor their beards till they had driven the French entirely out of German lands. Nevertheless, it had the highest percentage of deserters in the Army of Prussia, was treated with marked coolness by the King (who was anything but an ardent nationalist and anyway preferred his regulars), and accomplished relatively little in the way of major military success.
The average size of the Corps was 2,900 infantry, 600 cavalry and 120 artillery, varying throughout the war. It fought in many battles, operating first independently in the rear of the French troops, later as a regular unit in the allied armies. The Lützowers displayed great gallantry throughout the remainder of the war, and proved a source of constant annoyance to the French, who regarded them with exceptional hostility, Napoleon himself referring to their chief as “ce brigand Lützow, chef du corps de la Vengeance“ (“that robber Lützow, head of the band of Revenge”).
At the proclamation of the armistice of June 4–August 13, 1813, the Corps, eager to gain a dashing victory against the hated emperor, had been deep behind enemy lines and were hastening back to German-held territory (supposedly under a French safe-conduct), when they were caught there in contradiction to the terms of armistice. The French general Fournier ordered an attack on the Corps, replying to a demand for explanation, “Armistice pour tout le monde, excepté pour vous !“ (“truce for all, but not for you”).
After the peace of 1814 the Corps was dissolved. The infantry were converted into the 25th Infantry Regiment (from November 5, 1816 known as the 1st Rhine) as regular infantrymen, consisting of 2419 men (82 officers / 2337 troops) organised into a 1st Battalion, 2nd Battalion, and 3rd Battalion, under the command of Christian Friedrich Engel von Petersdorff (who had been a major under Lützow); the cavalry were reorganised into the 6th Ulans under Lützow himself. After Napoleon’s return from Elba, both regiments fought at Ligny and Waterloo during the Hundred Days. The composition of their units remained unique and still bore the impress of the Lützow corps, e.g., retaining the same black litewka and shako. 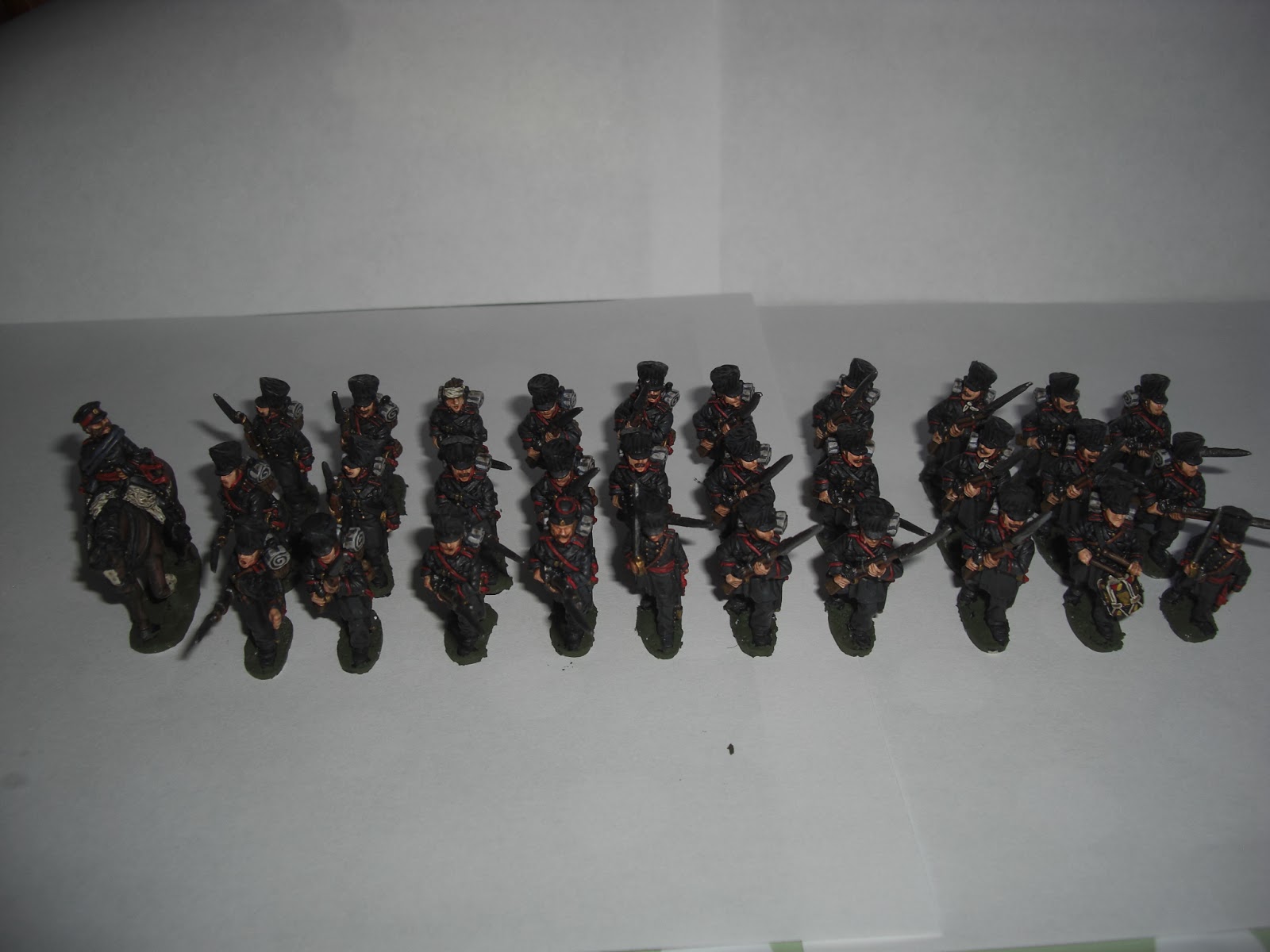 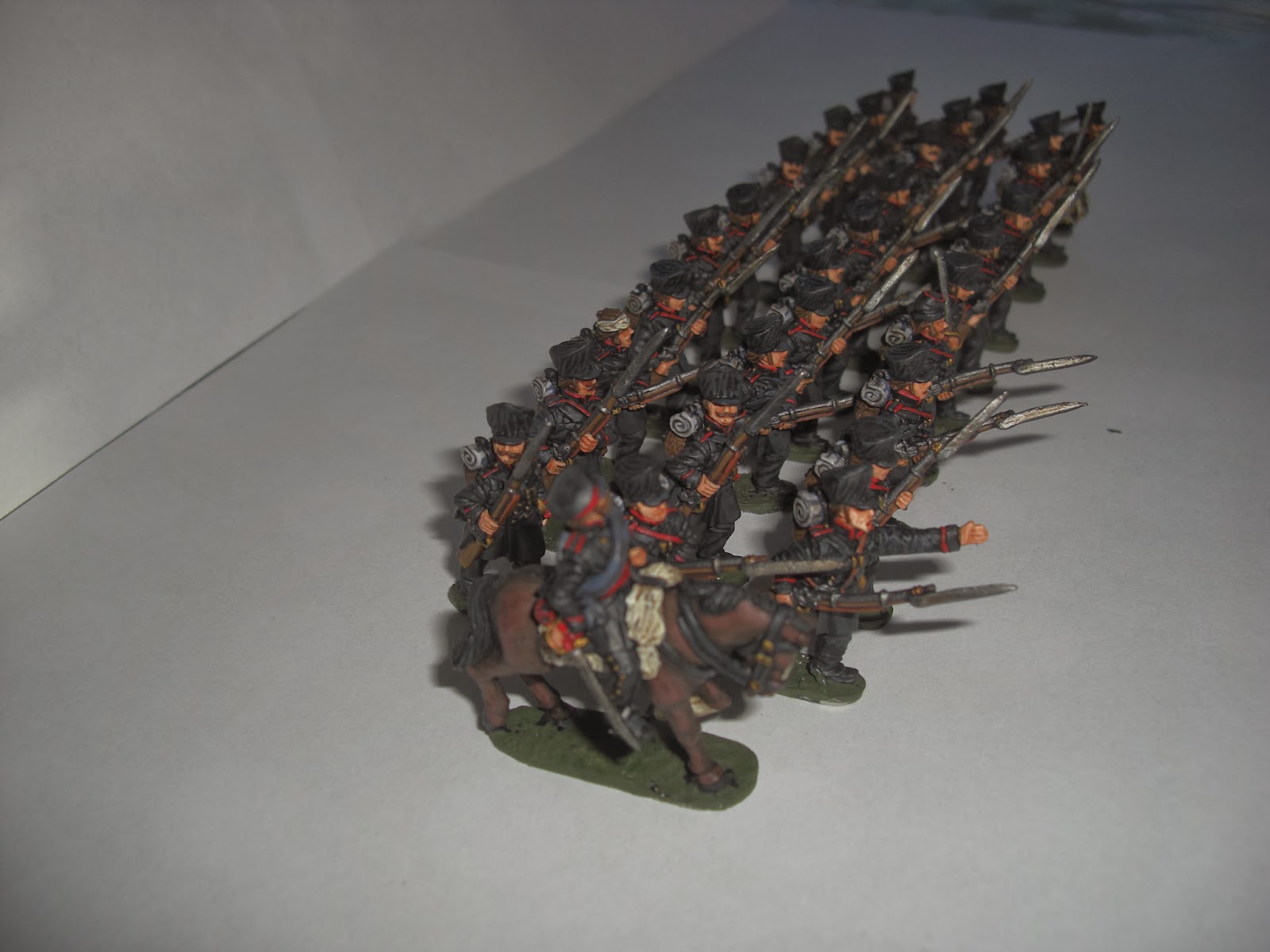 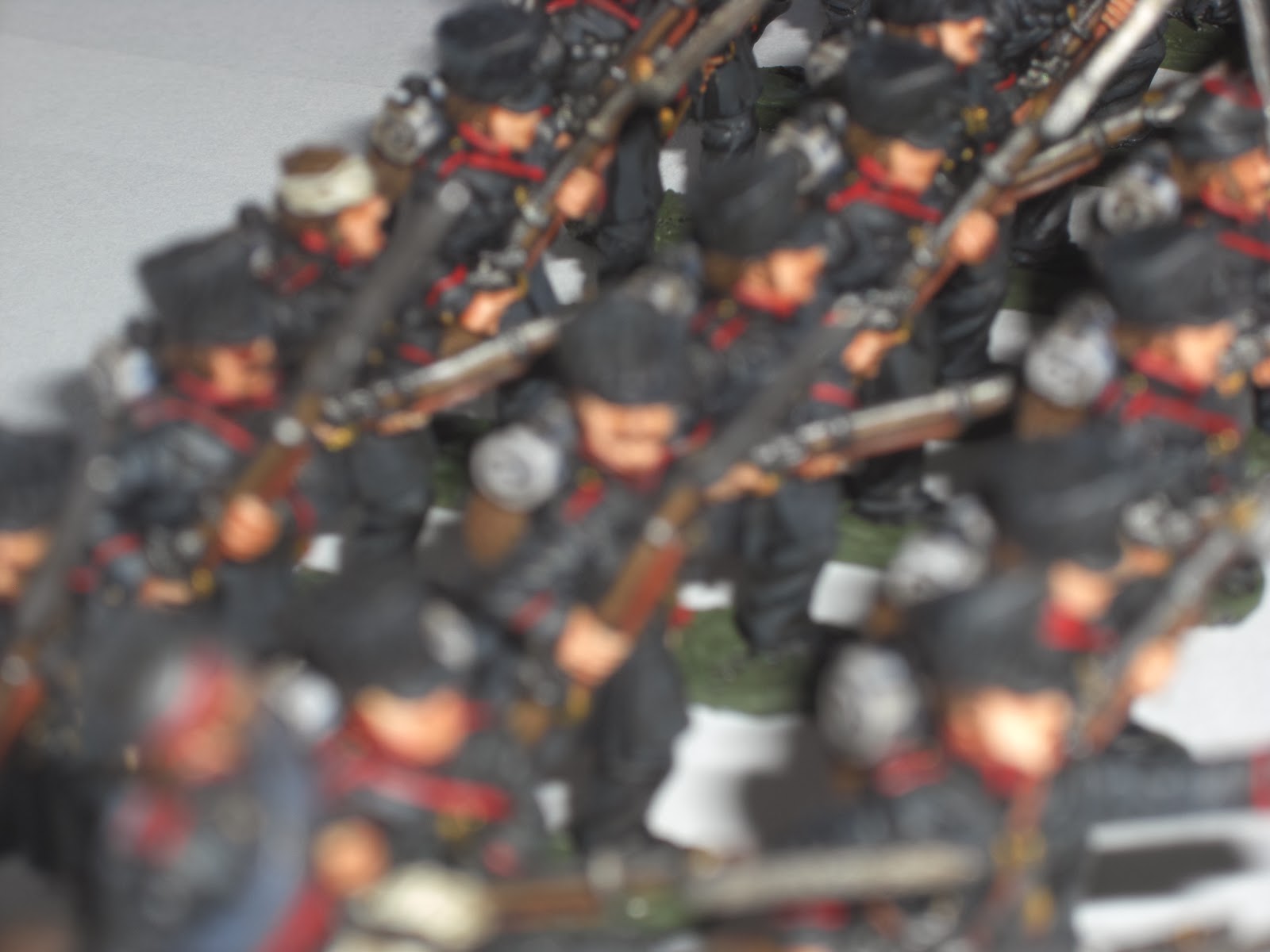 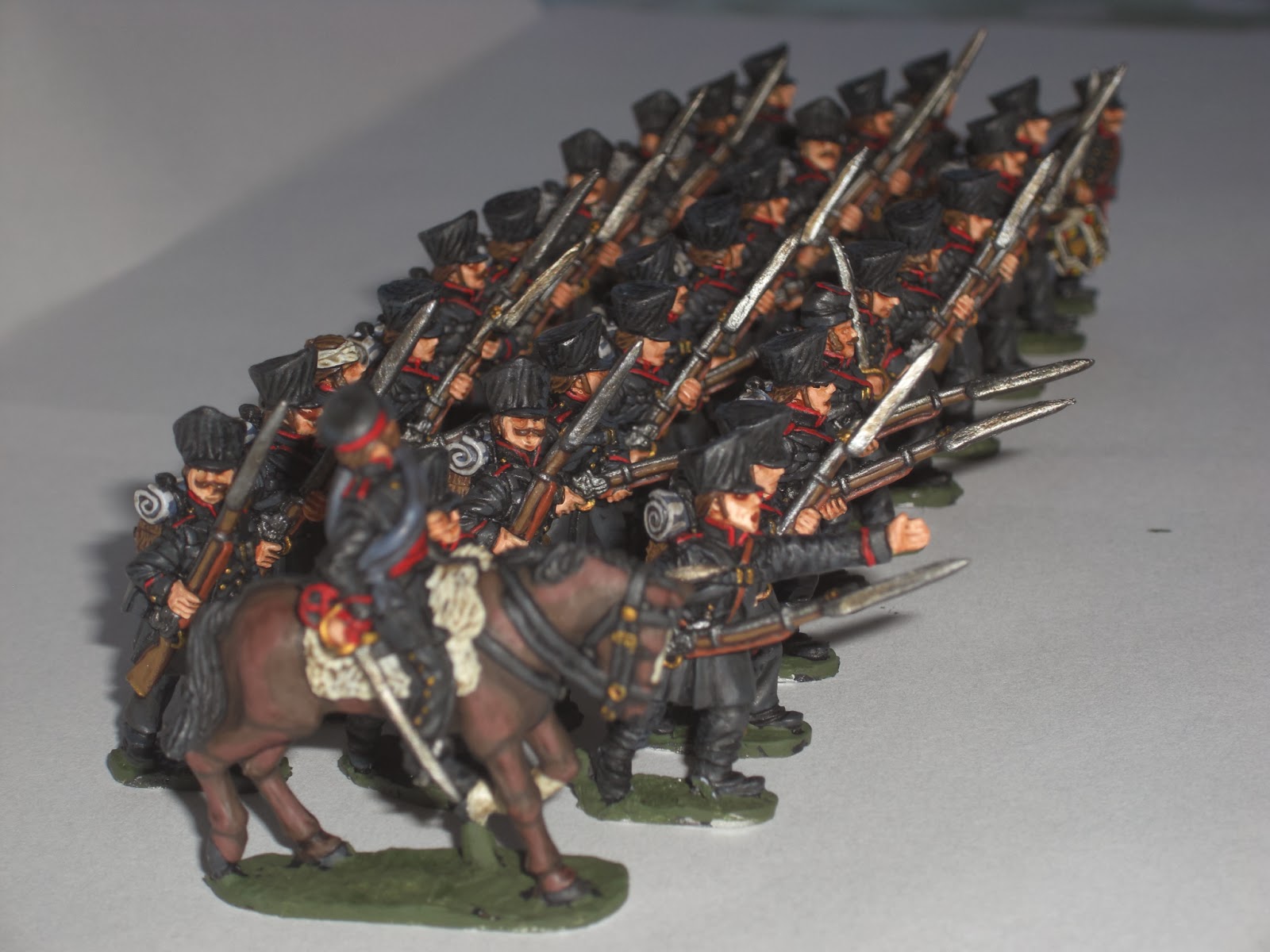 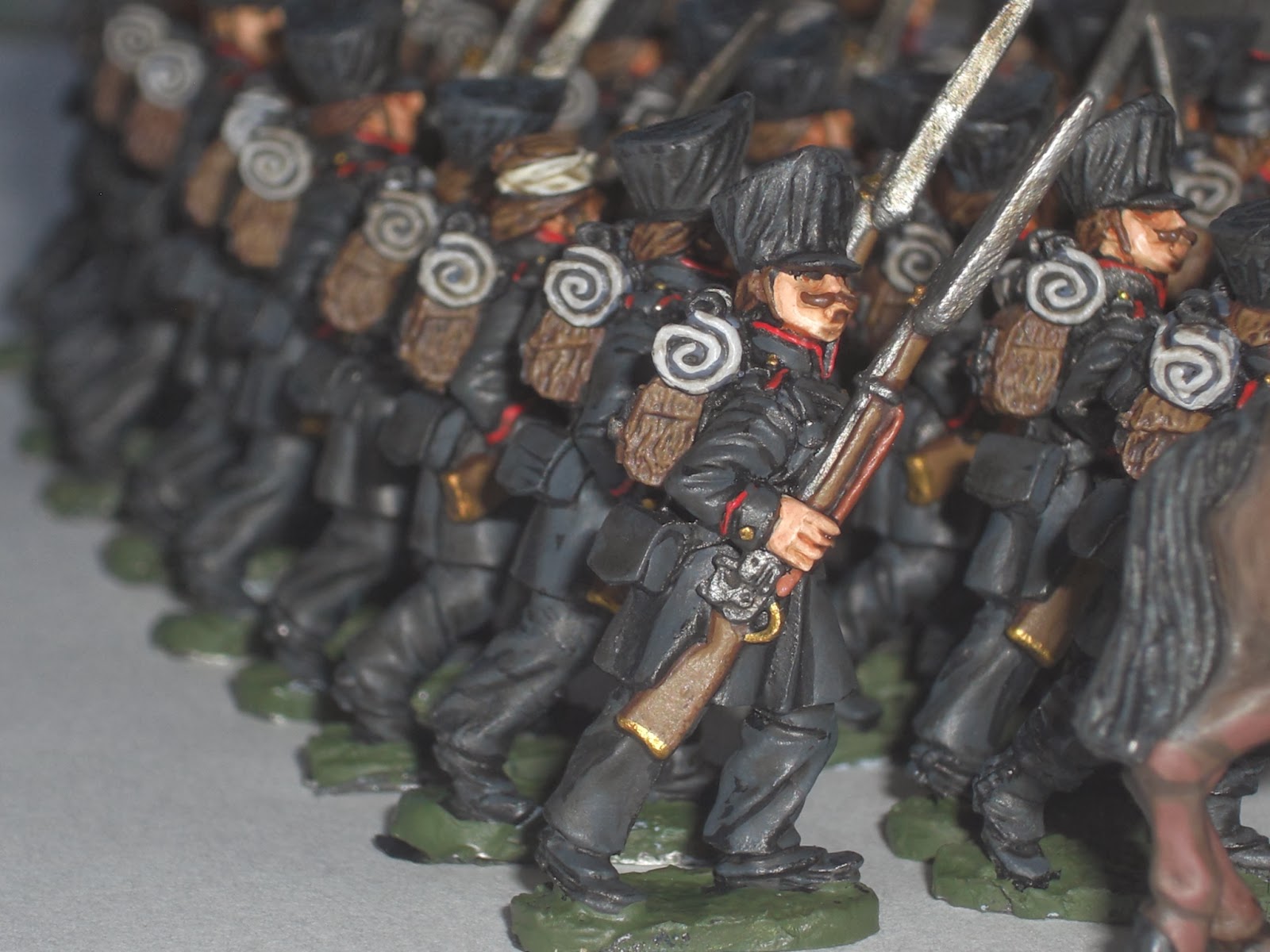 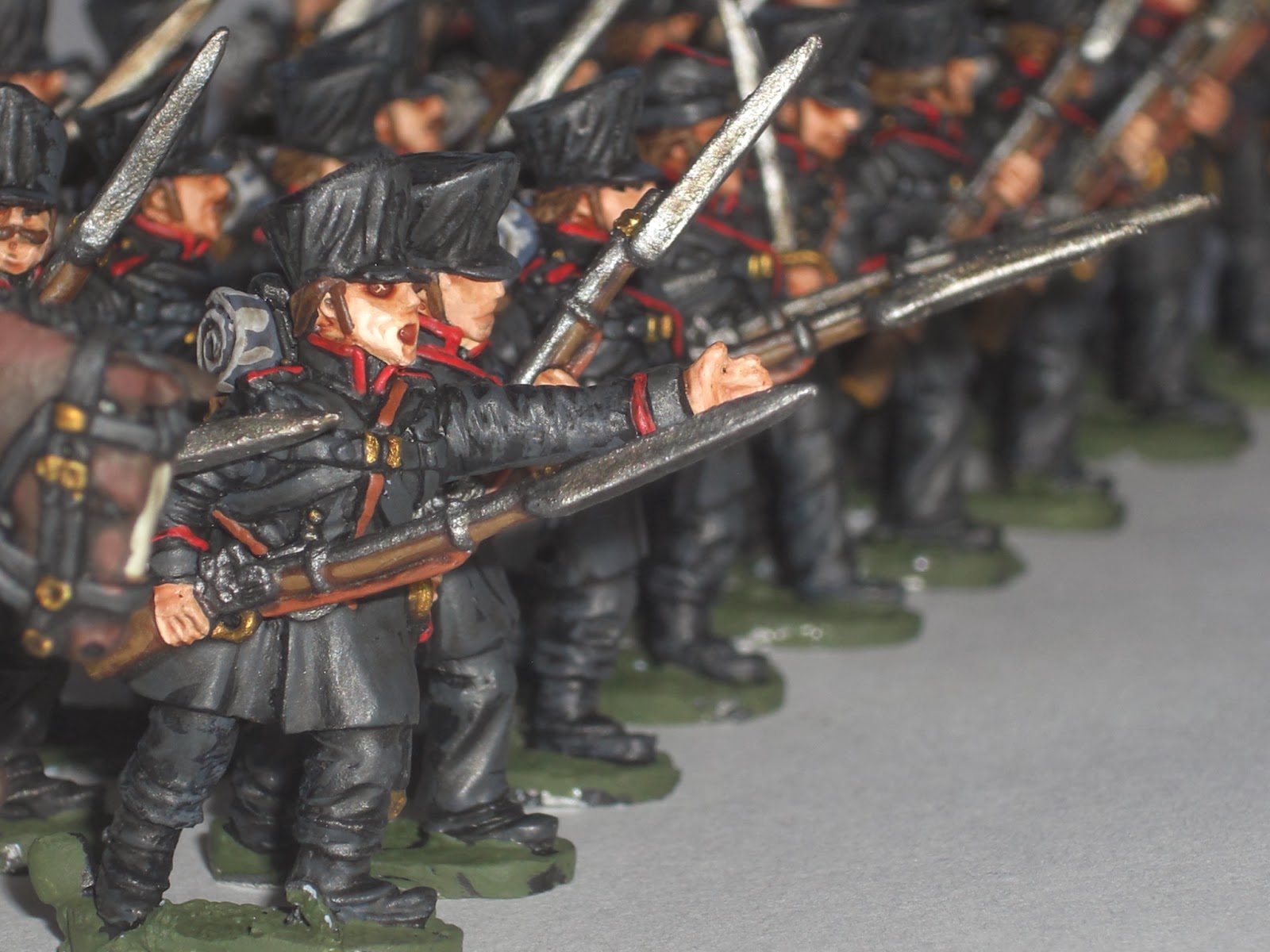 If you want figures painted either visit our website at www.abrushtoofar.com  or email us at brushtoofar@aol.com