So what is on our painting table at the moment?  Well several commissions at the moment. The first is part of a world record attempt that is taking place at the end of June for charity. We are painting a number of 28mm Portuguese Napoleonic line infantry as part of this attempt and the first pictures of some of the first completed figures are below.

﻿﻿﻿﻿ ﻿﻿﻿﻿
We have just finished a British 28mm Artillery Battery. In this case the buyer wanted to base them themselves. This unit has just been shipped the US.﻿ 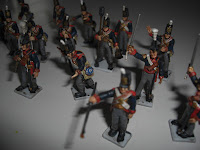 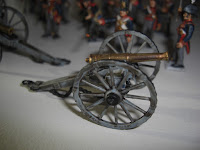 Leaving Napoleonic for a moment we have a small army of Games Workshop High Elves approaching completion. These figures are part of a boxed set which also included a Skaven Army. This particular customer has sent us a large variety of figures from AWI,Lord of the Rings, Wildest Africa,Warhammer 40K , World War II, Napoleonics and many other fantasy figures. 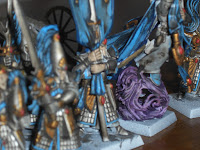 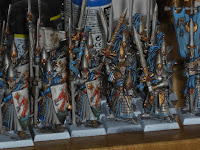 Also on the go is a horde of 28mm ancients. This commission of 100 figures is the second lot for this customer and each figure will based on a 20mm X 20mm ply base. The first lot included almost 90 ancient German horde and archers plus roman legionnaires and cavalry. 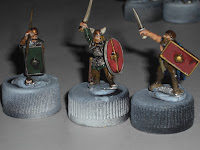 Going back to Napoleonics we have an unusual unit approaching completion in the form of Napoleons Legion Irelandis. These Irish fighters fought for Napoleon and wore french units in the characteristic Irish Green. 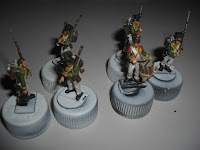 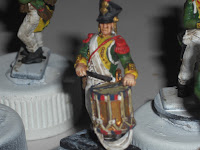 Also approaching completion is a unit of the British 16th Light Dragoons. These are part of a commission which includes cavalry and artillery in metals. 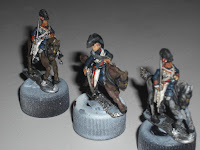 That's all for now. We have a number of orders also appearing on the table but they have not really got going yet so have not appeared in this report.
cheers
Jono
Posted by jono at 12:24 No comments:

GREETING FROM A BRUSH TOO FAR 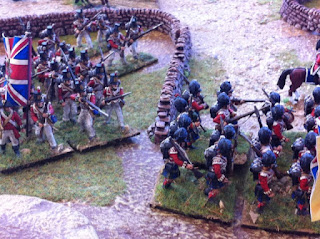 Since starting the business just over two years ago we have amassed a number of return customers who honoured us by letting us paint their figures. One question that has repeatedly raised its head is how to best keep our customers informed as too how their commisions or orders are progressing as well as let prospective customers see what we are about. Once a week we aim to post an update with photos of what is on our painting tables along with anticipated completion times and also photos of finished figures before they are dispatched. We are also keen wargamers ourselves and can be regularly found cursing dice rolls at the deeside defenders. We will be featuring battle reports that use figures available through the online store. First post will be this tuesday 5th April and future updates will be available each tuesday following. Happy Gaming and may the dice gods shine on you more often than they do me.
Posted by jono at 04:14 No comments: