We are just in the progress of finishing off yet another commission. This time for an entire box of Victrix highlanders painted to resemble the 42nd Royal Highland Regiment otherwise known as the Black Watch.
The figures have been painted using Vallejo, Foundry and Citadel paints and the Flags are from GMB. 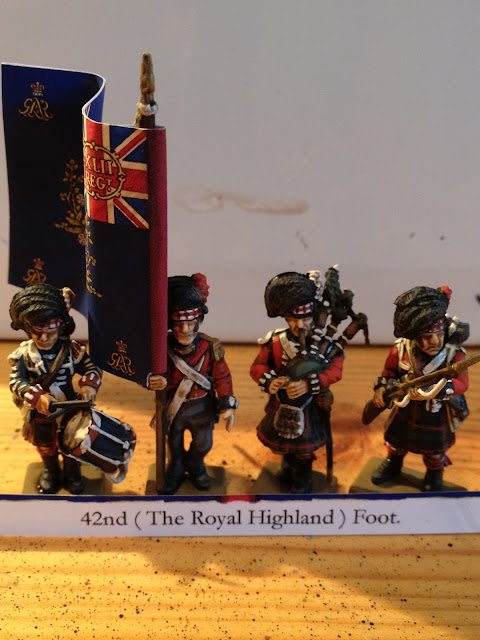 These figures are available from the on line store but if you cant afford to have us paint them or just want to give it a try yourself why not use our down loadable paint guides. For the low price of £1 on the website www.abrushtoofar.com and with a comprehensive list of paints used, full colour photos and tips we will tell you which paint to use where and when and hopefully you can produce figures of your own to grace your gaming table. At the moment only the highlanders are available for download but many more guides will be appearing over the next few weeks.

Some of the guys at the war games club to which I belong will be recreating the landings at Sword Beach using 6mm figures sometime in the next month. The rule set will be Spearhead and somehow I have found myself painting the Royal Marine battalions and the Parachute battalion that held the Pegasus bridge and took the small port of Ouistreham (apologies if that isn't spelt right).

Anyway here are some pics. 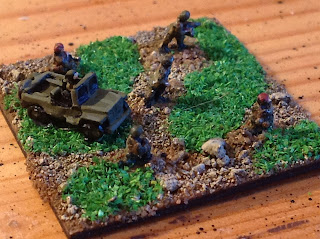 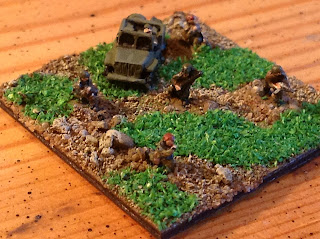 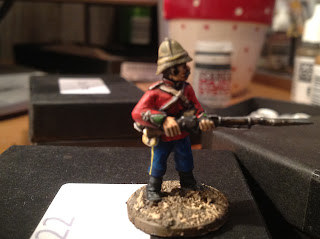 Every now and again we get asked to paint something that we have not done before in 28mm. This fellow is no exception although we have done 15mm Zulu war. After literally hundreds of Napoleonic figures this chap has been a welcome distraction.  Having enjoyed painting him so much and being huge Zulu fans we have taken the decision to add the Empress Miniatures range of Anglo/Zulu War figures to our painted units. The store will be updated within the week.
Posted by jono at 11:41 No comments:

Victrix sell off their metals range

Victrix recently announced that they have sold all their metal 28mm Napoleonic range to Brigade Games in America. Unfortunately this means that until we can confirm that we can still get them at a reasonable price we have taken the Portuguese figures off the website. At the moment we are considering offering units made up from other manufactures. More to follow soon.
Posted by jono at 03:00 No comments:

Perry miniatures have announced the intended release of their new plastic Austrian Infantry set.(available last week in September 2012)The box contents represent an Austrian ‘German’ Infantry battalion from 1809-1815.The command consists of an officer, standard bearer, drummer, sapper and two NCOs. The box contains heads for all figures with either helmets ( the helmet was last used in 1809), shakos (used from 1809-15) or the Landwehr corse-hut. . There are 48 figures in the unit.

Painted units are now available for pre-order on the Brush Too Far website.

New pics of our painted Perry French figures are going on to the websites store this week. Pictures include French line, Young guard, Imperial Guard Grenadiers and Imperial Guard Chasseurs. We hope to fill in some of the other blanks very soon.
Posted by jono at 02:19 No comments:

Email ThisBlogThis!Share to TwitterShare to FacebookShare to Pinterest
Labels: pics

It has come to our attention that there was a problem on the website with a link that took customers from the home page to the on line ordering page. This has been fixed. Apologies to anyone this has affected.
Posted by jono at 02:19 No comments:

Latest commissions off the table

Its been a while since our last blog. With the terrific summer of sport and the kids holidays its been pretty full on but we have still been turning out the figures.

Here's just a quick look at some of those that have graced the painting tables recently. 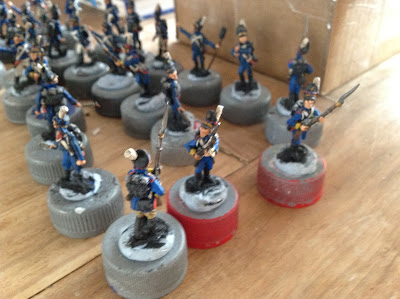 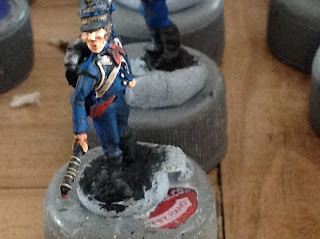 Our second batch of Napoleonic Portuguese Infantry and Artillery for this particular customer. These are eagle figures I think. All the paints are Vallejo. The figures have been highlighted ,given a wash and then Matt varnished. Bottle tops are courtesy of Coca Cola. 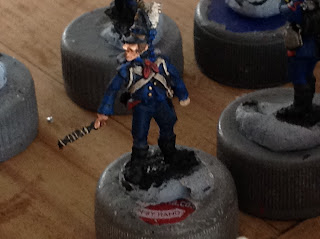 Paint schemes came from one of the Osprey reference books and a reference volume of Napoleonic uniforms.

Another revisit from another customer. If you have seen earlier blogs you may remember that we featured a 15mm Cossack army. This time its knights and peasantry. 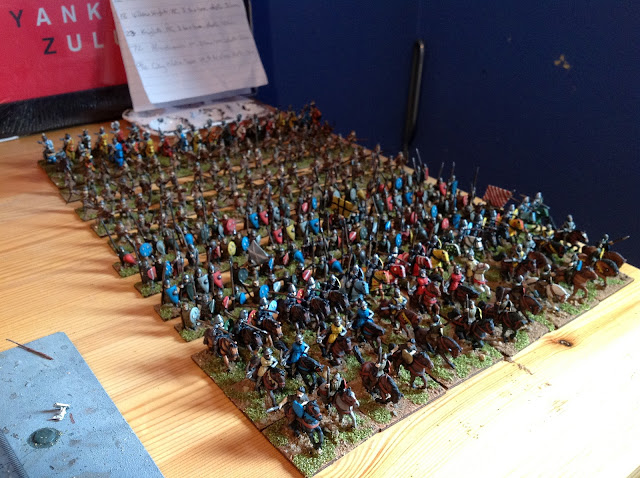 There was a lot of metal involved here and this was somewhat of  a marathon to get these finished. We tried to stick to one set of colours to give the army some uniformity. 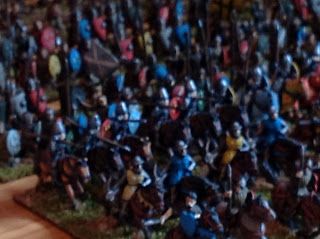 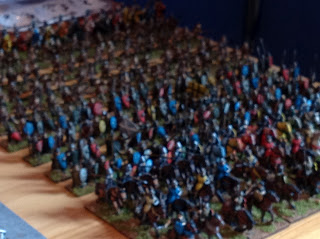 This is one of my favourite kits out their at the moment. The Victrix artillery is our most requested unit. All paint is Vallejo again and in this case the figures have been based and varnished 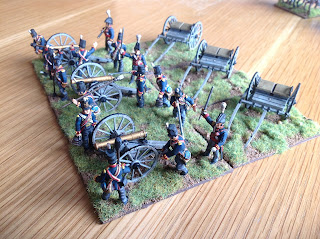 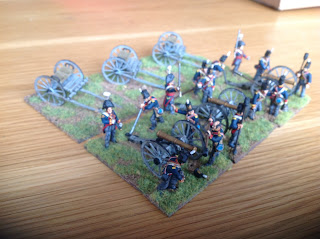 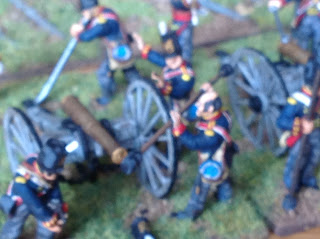 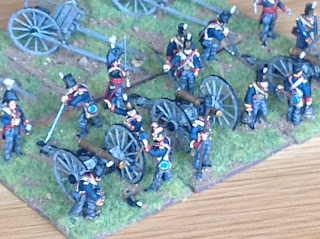 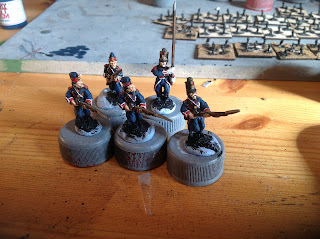 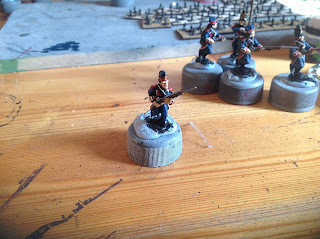 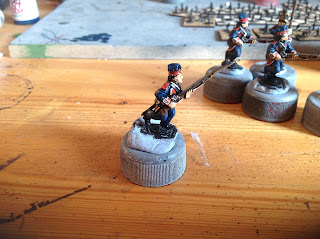 There were 61 of these figures in the order split into two Regiments. The figures pictured are of the 1st Mexican Line Regiment. The uniforms are Foundry French uniform dark shade with a highlight of the Light shade. The rest of the paints are Vallejo. Further details can be found in an osprey book on the Mexican war. The 6mm figures in the background are Heroics and Ross WWII British which are being painted up as Royal Marines for a Sword Beach scenario which some of our local club members are fighting shortly. We will post pics when they are finished. 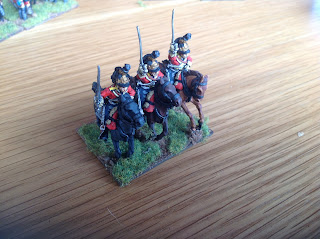 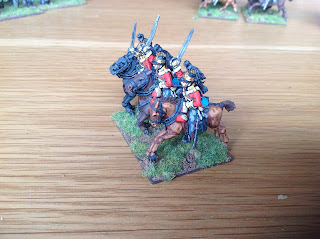 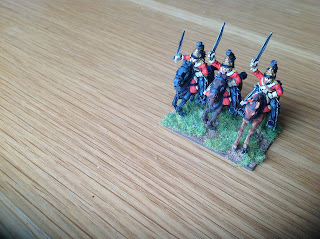 Boy did we have a nightmare with this order. Initially we had ordered for the customer some Victrix metal Dragoons. After a lot of waiting and messing about and a number of emails to a usual supplier (most of which went unanswered) we finally discovered that Victrix had sold their entire range of Metal figures to some company in the states and their were no figures to be had. So we had to replace the cavalry figures with Perry figures. To be fair their is not a lot of difference in the quality or size of the figures. The uniforms are Foundry British scarlet and the Nags have been painted using the Foundry horse colours range. All have been washed and Matt varnished.
Posted by jono at 17:11 No comments: